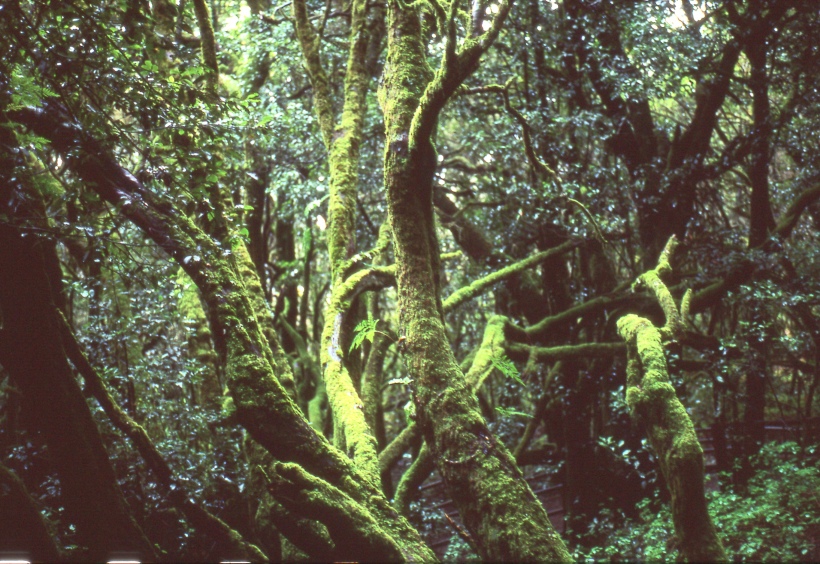 Back in December I managed to get away for some winter sun to Tenerife.

I had previously liked using slide film in the Hasselblad 500 c/m so I was keen to see what it would be like in the Leica.

I had a roll of Kodak Ektachrome E100 in my film stash for a while that I had been saving and I knew the trip to Tenerife would be the perfect opportunity to finally use it.

I decided to use the film during a day excursion to La Gomera.

I took the photos using my 50mm Summicron lens and the photos were processed at my local lab using the E-6 process.

During the excursion, we were driven up into the mountains and here are some photos I took of the landscape:

We were then driven to a dense forest area in the mountains and I really liked the green moss that was growing on the trees so was keen to see how this would look in a slide photo:

I was really impressed with the vivid green detail the photo produced. I also took one more in the shade, which looks completely different and not as vivid:

For lunch, we visited a restaurant in the mountains and sampled some of the local food and wine. We were entertained by the restaurant staff doing a demonstration of their local language called Silbo Gomero (also known as El Silbo). It’s basically a whistled register of Spanish which is used by the inhabitants of La Gomera to communicate across the deep ravines and narrow valleys within the island. It was fun to watch.

Inside the restaurant was this really cool view point that I knew I had to take a photo of:

I then took some photos of the views from the restaurant:

Here is one of my husband admiring the views from the Restaurant:

Here are a couple of photos I took at another view point on the way back down the mountains:

La Gomera was a beautiful island to visit. If I was to go again, I would like to spend a bit more time around the local marina and square which looked really interesting but I only got to spend about an hour there since this excursion mainly focused on time spent up in the mountains.

I didn’t manage to use up all the film whilst on this excursion so took the final remainder photos from my balcony where I was staying on the mainland in Tenerife:

I really do love slide film, especially when processed under E-6. For me, the bright vivid colours are just amazing and I also love the feel of the photos. They remind me of a 70s holiday brochure.

Whilst I still have some other colour 35mm films to use in my film stash, going forward for the Leica M6, I think the Ektachrome E100 will most certainly be one of my go to films for colour photography from now on.