I first discovered this camera when I was reading the Tokyo Camera Style book by John Sypal.

I initially fell in love with the design of the camera but was also very intrigued when I discovered on the internet that it’s a half frame camera.

Half frame camera’s were popular before I was born so I wasn’t sure what this type of camera was.

After further research I discovered that a half frame camera uses twice as many frames at half the normal frame width on a 35mm negative to an ordinary film camera. For instance, if I loaded this camera with a 36 exposure film, I would be able to get 72 images instead of 36. This was because developing pictures back in the 1950s/60s was quite expensive so this was a great way to get twice as many photos developed for the same price. As development of photos got cheaper in subsequent years, the half frame camera became less popular.

I found this highly fascinating and immediately knew I would love to add a half frame camera to my collection.

After further research I found lots of half frame cameras had been released into the market over the years. Initially Olympus had released the Olympus Pen F camera and some of these camera’s have a cool F design on the front of the camera (like the lens cap design in my picture) but these didn’t include a self timer. Olympus also released other types of half frame camera’s as well as these Pen SLR camera’s.

I also discovered that Canon released a half frame version too. In the end I decided that the Olympus Pen FT was the camera I really wanted to own and use. The main reason being that it had a self-timer.

Unfortunately my local second hand camera shops didn’t have any in stock and although they’re not rare, they are not as readily available as perhaps an Olympus Trip 35 and they also come at a higher price tag.

I’d already decided that I was willing to pay more for a nicer condition one as I prefer to have my cameras in great condition, especially if I’m going to use them regularly.

Initially I found that most of these cameras are available for sale on eBay but are mainly for sale in Japan. Ideally I wanted to purchase mine from a UK seller so knew I had to be patient as they are few and far between.

After several months of searching and checking in with my local second hand camera shops to see if they miraculously had one come into their shop I finally found the one I wanted on Etsy.

I bought it from a gentleman in Scotland who is a professional photographer and refurbishes vintage camera’s as a hobby. He mainly finds his vintage camera’s in charity shops and he told me a lot of them are a complete write off and beyond repair but every now and again, he’ll find a camera in amazing condition or which he’s able to easily repair and cosmetically it’s in great condition.

This camera was one he had discovered in immaculate condition and only needed some slight refurbishment. He had personally owned the camera for over a year but found due to other photography commitments, it wasn’t getting the use it truly deserved so reluctantly he decided to sell it.

The camera came with it’s original leather case and the Zuiko 40mm f1.4 lens. The Olympus Pen FT camera was in production from 1966 to 1972 and what I loved even more was that the camera came with the original receipt which showed that it was purchased on 11th June 1972 and written on the receipt was the serial number of the camera and the serial number of the lens which matched my camera and lens.

The shutter speeds on this camera are B/1 to 1/500 and it has a unique rotating disc design that syncs with the flash at all speeds. The aperture is from f1.4 to f16. It has a light meter reading in the viewfinder which is numbered with a needle rather than a needle which you aim to point to the centre which I found unusual but was easy to understand. Basically the needle in the viewfinder will point to a number (ranging from 0 – 7) and you’ll match the number on front of the lens to make sure you get the right exposure. You can adjust the shutter speed to change this number if you need to.

I certainly wasn’t disappointed when I received and started using this camera. It’s an SLR and has interchangeable lenses. I also loved the half frame viewfinder and how I had to think a bit differently when shooting an image in comparison to taking pictures with a normal camera.

It’s a much smaller camera in comparison to my Pentax K1000 so I can literally pop it into my handbag which is great.

Here are some photos I’ve taken using the 40mm lens. I took the film for development to my local film development shop called Colourstream in Brighton. They told me they could only develop the film on a normal frame width which means that there would be two photos on the frame with a black border. They also informed me that the exposure would be a compromise between the two images rather than each individual one.

I was keen to get my first film developed asap so was happy for them to develop the film this way and was interested to see how two photos would turn out printed together.

Here are some of the results which I shot on a Kodak Colour Plus 200 (36 exposure) film: 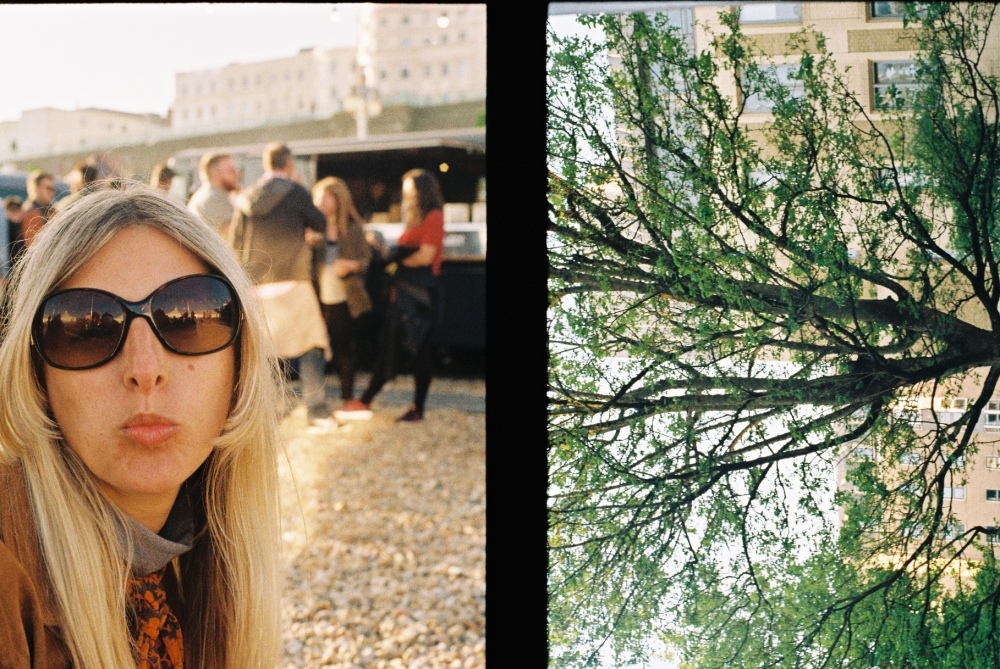