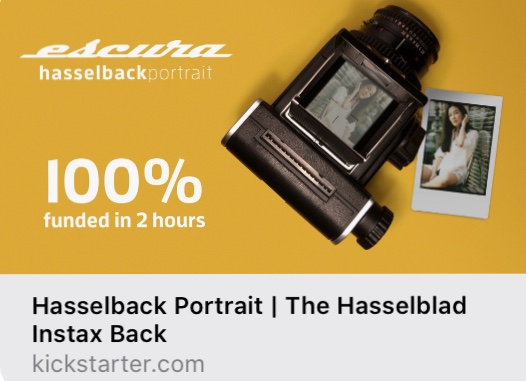 Yesterday I discovered via an online Hasselblad group I belong to, that a company called Escura had launched a campaign for an instax photo back that is compatible with the Hasselblad V-system cameras.

I was first aware of the company Escura when they launched their first Kickstarter campaign in 2018 for a 60s style Instant Camera (the Escura Instant60s). Whilst I found the camera interesting, I never backed it due to already owning my Leica Sofort Instant camera.

The new instant back they have designed for the Hasselblad will allow you to shoot Fuji Instax Mini instant formats which, they claim will help give complete control over exposure and framing allowed by the Hasselblad system.

For anybody that knows about Hasselblad and instant photo options currently on offer, there is a Polaroid film back that can be purchased second hand quite cheaply. When I first purchased my Hasselblad I nearly purchased a Polaroid back for around £60. However, the reason I didn’t in the end, was because the only film that these backs are compatible with is the Fuji FP 100-C which has since been discontinued.

I’m aware that a company called Supersense recently released an alternative Packfilm for the Polaroid 100 type back but, it is very expensive to purchase (around £24 for 6 x photos) in comparison to the Fuji Instax mini film (around £10 for 10 x photos) so I’m still in two minds about purchasing a vintage Polaroid back.

Since the Escura back will be compatible with the cheaper Fuji Instax mini film I was extremely excited about this new product!

They met their funding target within a couple of hours of the Kickstarter launch which, was great for them. Initially I thought I may back this Kickstarter Campaign immediately too but when I saw that the first early bird price was going to cost me approximately £171.00 (including postage to the UK), I thought I’d better do some further research before taking the plunge and backing it.

Thankfully there are a couple of YouTube videos that have been posted by photography bloggers who received a prototype of the product to test.

I eagerly watched both videos and was impressed with the photo images being produced. At this point I thought the whole process of having to put in a new viewfinder attachment before I could take a photo with the back may slightly annoy me if I’m out and about taking photos as I would most likely want to regularly change between the normal 120 film back and this one.

What I also noticed when watching the YouTube videos was that all photos were taken fairly close up (mainly of people and some pets) and I couldn’t see any landscape type photos.

Thankfully upon reading the comments that people had posted on one of the YouTube videos, I noticed that somebody had asked if the instax film back can be shot at infinity and the answer was NO.

Upon looking at the Kickstarter campaign again, the penny finally dropped that the word ‘Portrait’ is noted in the title of the product. This therefore meant that the instax back is only really designed for portrait photography work and general close up shots.

For me, I don’t tend to shoot portraits often on my Hasselblad. I tend to use mine more for landscape work and the majority of the time I shoot at infinity.

I knew immediately that I could not justify the £171.00 cost for an instant back that I would rarely use.

I certainly wouldn’t take this camera out with me for social events to try and justify using the instant back since it’s too big plus, I have my gorgeous Leica Sofort instax camera which does a great job for parties anyway and has a built in flash.

I’m hoping that in the future there may be another instant back design for the Hasselblad that will work for infinity shots too as that would be something I would be very tempted to purchase.

I also noticed that some people had asked on various social platforms why they hadn’t designed a back for the Instax Square film since the Hasselblad is a 6×6 camera. Escura’s response was that the Instax mini is more popular than the square and mini size is apparently perfect for Portrait. Also Escura said that there is no Black and White square instax film and the cost of the back would be more expensive to purchase if they designed a square one.

Here is a video of the Kickstarter campaign for anybody who may be interested in purchasing one:

They plan to ship the first batch in July 2020 so the wait won’t be too long for anybody wanting to purchase this.

4 thoughts on “Hasselback Portrait – the Hasselblad Instax Back”