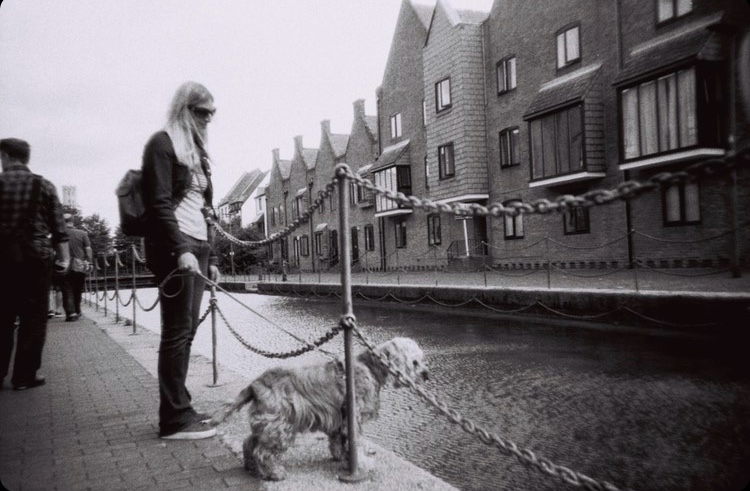 Back in August I attended a photo walk in London organised by the London Camera Project and Kosmo Foto.

What was also exciting about this photowalk was that everyone attending would receive a 35mm roll of Kosmo Foto film. There were also prizes and rewards arranged throughout the walk.

On this particular occasion, I didn’t have anybody to look after my dog, but I desperately wanted to attend this photo walk and thankfully the organisers were happy for me to bring her along.

My dog Daisy and I travelled up to London via the train from Brighton and I’m grateful that I have a pet who is very good at travelling and we have been to London together before on the train so I knew it wouldn’t be a problem. I’m also able to take her on the Underground which is great.

This is Daisy getting settled on the train on our journey up to london (photo taken on my iPhone):

When we arrived at the CitizenM Hotel a little earlier than the official meeting time, it was quite obvious to see who was there for the photo walk because they had camera’s with them. Since I had Daisy with me, I was unable to enter the Hotel, where a lot of people were waiting. However, this was an advantage too because I was able to chat and guide the people who were there for the walk who wasn’t sure where the group was.

Here is a lovely photo of Daisy taken outside the CitizenM Hotel by @lomo_keiko using her Lomo LCA Camera and Lomography 100 film:

Daisy is with me most of the time so I’ve developed a skill in taking photos whilst also holding her lead. This meant that she really wasn’t a problem on the walk.

Thankfully, she proved quite popular with the other photographers attending the walk and I think a few photos were taken by them of her.

I decided for this particular photo walk to take my Olympus Pen FT camera with me. Whilst I was tempted to take my Hasselblad 500 C/M, I knew the Olympus would be the most manageable camera to take photos whilst handling a dog at the same time.

Although we were handed a roll of the Kosmo Foto film, I still had a Cinestill B&W film in this camera from some other event where I took photos and didn’t manage to use up the whole of the film (since it’s 72 frames!) so thought it would be best to use it up on this walk. I also knew I wanted to take black and white photos.

Here are some of the photos from the walk:

Here is a photo of Daisy and I taken by @lomo_keiko using my Olympus Pen FT:

This photo was also taken by @lomo_keiko using her Lomo LCA camera and Kosmo Foto film:

As you may be able to tell, Daisy was quite keen to jump into that river and have a swim!

Lastly, here is a photo of Daisy taken by @ermess_ using his Leica M6 and Kosmo Foto film:

Whilst on the photo walk, we stopped at a couple of pubs along the way and the final one we ended up at was a really nice bar called Hawkes Cidery & Taproom, where further film photography prizes were handed out. They also serve some lovely Pizza’s which I really enjoyed after all that walking!

Needless to say, I had a lot of fun on this photo walk and it was really nice to meet some new people, as well as catch up with some friends I’d made from previous photo walks.

Whilst I wouldn’t normally take Daisy with me on a photo walk, on this particular occasion, because everyone was very accepting of her, it was really nice to have her out with me and I know she loves to visit new places.